Our last stop in Nashville was the Parthenon in Centennial Park, which, ironically, is the first thing we saw from the road when we drove into town a couple nights back. 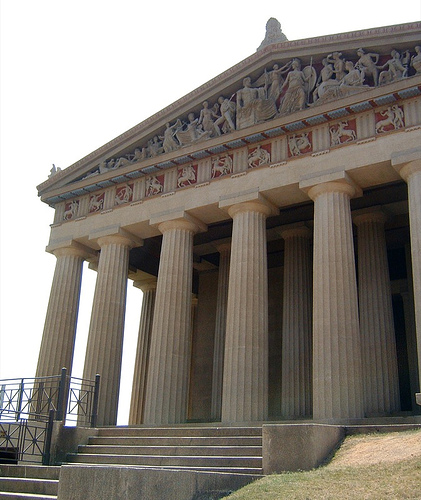 Originally built for the Tennessee Centennial Exposition of 1897, this scale replica of the Parthenon in Athens (yep, SCALE, it’s gigantic!) was the centerpiece of the exposition and though it was meant to be temporary, the building soon became something of a Nashville landmark and was left standing.

However, by 1921, the Parthenon was crumbling so it was rebuilt to last in the 1930’s and aside from a couple of minor touch-ups over the years (they recently added air conditioning, which I’m sure was welcome) the building remains as it was in 1897, the perfect architectural tribute to the “Athens of the South”.

We didn’t get to go inside — where they house a gilded, 42-foot-tall statue of the Goddess Athena that is the tallest indoor sculpture in the United States! — but that was fine with me, because the outside was why I was here in the first place.

For the Parthenon is a key locale in one of my all-time favorite movies, director Robert Altman’s 1975 masterpiece, “Nashville”.

I won’t give anything away for those of you who haven’t seen the film, but the last 20 to 30 minutes of the movie take place at a huge free concert at the Parthenon and what happens at the end will literally blow you away!

A shocking ending to a lush, rambling, beautiful film that truly captures the multifaceted nature of this amazing city…wow. If you haven’t seen it, rush out and rent “Nashville” today! The movie is long and slow in parts, but the music is awesome and trust me, that ending will really knock your socks off!

Just walking past those towering columns where the late, great Robert Altman shot one of the coolest endings ever, wow, I was in film geek heaven.

But after taking dozens of pictures while the ladies wilted in the withering heat, it was time to say goodbye to Nashville. The ghosts at Loretta Lynn’s plantation home were calling us…