Snaking through the rolling green hills between Nashville and Memphis is Interstate 40, which we were delighted to discover is also known as “The Music Highway”.

Named in honor of the iconic musicians born and bred along its 210 mile stretch — Tina Turner, Chet Atkins, Carl “Blue Suede Shoes” Perkins, Bessie Smith, you name it — the Music Highway even has its own impossibly hip signage!

And the signs are just the beginning, the rest areas are even cooler!

For some reason rest stops out here are a billion times nicer than anything we have on the West Coast and most of them even have an attendant, on-site, 24/7. Crazy! And aside from being super clean, well-lit and enclosed, every rest area we’ve ever visited in the South (and between Courtney and myself, there have been MANY) has also been completely air conditioned. Yeah!

And as if all that weren’t enough, the rest stops along the Music Highway are also named after the musicians from the area!

We stopped at the amazing Isaac Hayes, Tina Turner and Booker T. & The MG’s rest area (pictured above) which is also home to the aptly-named Rufus Thomas “Walking The Dog” dog trail. I swear, all that was missing was piped in music, this place seriously rocked! 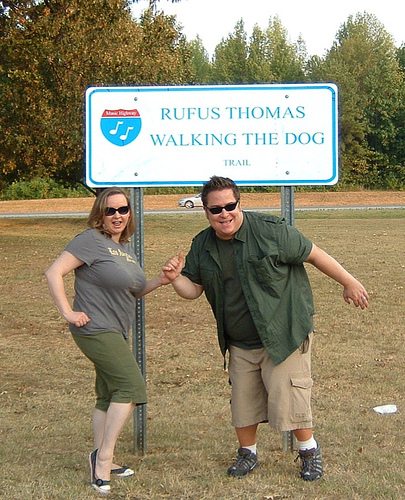 Makes you wonder why we don’t name our rest stops in California. I mean, hello, we name our airports after Bob Hope and John Wayne. Why not a Marlon Brando crapper? Could be cool!

Anyway, aside from being named after them, the rest area also had tastefully framed photos of the musicians hanging outside the attendant’s office in the lobby, pictured below. Yes, they had a lobby! Que fancy!

If we had more time we probably would have stopped at every rest area along the route just to see who they were named after, but, sadly, we did not. So, we kept moving, but man, what a trip these places were… 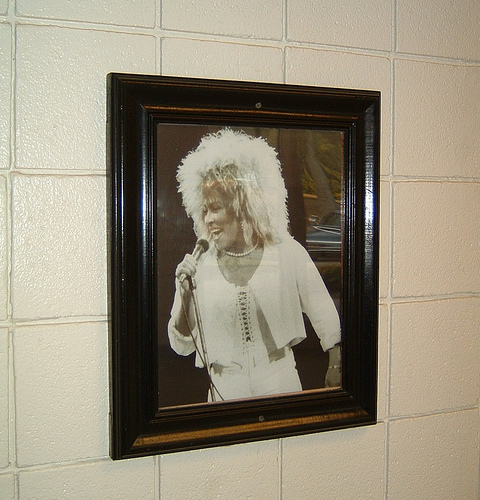 One response to “The Music Highway”