Our first stop after breakfast was the birthplace of Bluegrass, the amazing Ryman Auditorium in downtown Nashville. The original home to the Grand Ole Opry (which moved to newer, more Disney-fied digs called Opryland in 1974) the Ryman was built in 1892 by steamboat captain Thomas Ryman as a tabernacle for his tent-preaching spiritual mentor, Reverend Samuel P. Jones.

Yep, the “Mother Church of Country Music” began life as an actual church. 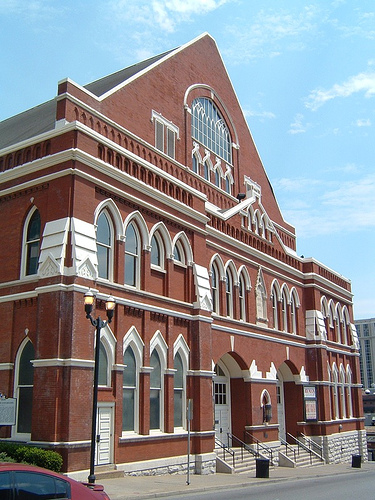 And stepping through the vestibule into the heart of the auditorium, you can still see traces of the Ryman’s true origins everywhere. The worn wooden pews — most of which are over 100 years old — are just as churchy and uncomfortable as you remember from Sunday school and the outer walls are lined with striking stained glass windows that give the entire building a haunting, otherworldly glow.

Although we were aware of the Ryman’s storied history as home to the Grand Ole Opry radio show for 30-plus years, we were surprised to learn that the auditorium was also home to hundreds of early vaudeville acts, silent films, theatrical productions, political debates and even the occasional livestock sale.

And the list of legendary performers who have graced the Ryman’s weathered boards could fill books: actors and speakers like Helen Keller, Rudolph Valentino, Katherine Hepburn; modern rockers like Coldplay, Chris Isaak, The Pretenders, and Neil Young (who shot his concert film “Heart Of Gold” here in 2006), and, of course, country music icons like Loretta Lynn, Ernest Tubb, Minnie Pearl, Bill Monroe, Patsy Cline, Mother Maybelle Carter and even Elvis!

Our backstage tour (a sweet deal at $16.25 per person) began with a short documentary hosted by Trisha Yearwood and then moved into the surprisingly cramped backstage area for a tour of the dressing rooms of Opry-regulars Minnie Pearl and Johnny Cash, who taped his TV show here in the 1960’s.

Since cameras were not allowed backstage, I’ll give you the highlights. Aside from the dressing rooms (which were very small but very cool!), there was a green room dedicated to all the “honky tonk angels” or “girl singers” who have graced the Ryman stage over the years.

The B&W photos on the walls were beautiful and there was this really cool modern artist who did folk art-type paintings of some of the greats that were insanely cool. We totally wanted to steal the portrait she did of Patsy Cline…amazing! 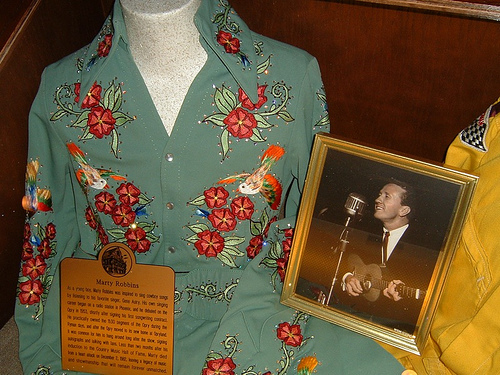 Our tour guide was a nattily-dressed old timer who was VERY impressed that Christine and I hadn’t just heard of Porter Wagoner, but had actually bought his new CD on Amazon before our trip. I swear, if that dude was giving out gold stars, we would’ve made out like bandits. He was awesome.

Finally, after perusing dozens of display cases of cool old Opry stuff in the outer area — yes, that is Minnie Pearl’s original “price tag” hat pictured below — you are invited to step onto the actual stage for photos!

I know! Could anything be cooler than taking the stage at the Grand Ole Opry? My God, we all had goosebumps and I was so nervous I held my guitar the wrong way. Hmm…guess I’m a lefty.

But no matter which way you hold your guitar, this was the perfect, awe-inspiring end an incredible backstage tour! 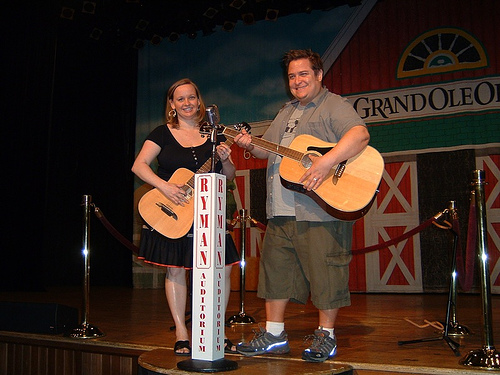 And after a rather lengthy visit to the gift store — located just beyond the spooky statue of Roy Acuff and Minnie Pearl pictured below — we headed off to visit the bustling honky tonks of “The District”. 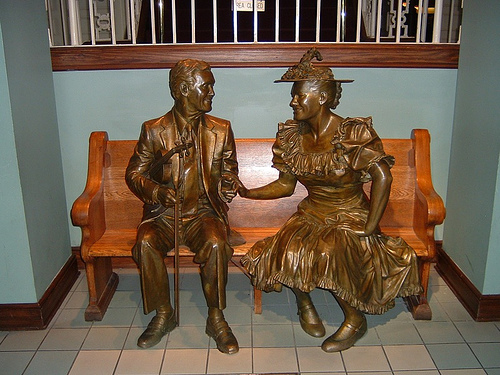 5 responses to “The Ryman Auditorium”